Greatest Commandment, Love Your Spouse, Love Yourself, Photo Challenge, single in the sanctuary

A number of my friends are participating in a “Love Your Spouse” photo challenge.  What this entails is that each day for a week, the individual will post a photo of them and their spouse.  It’s a cute activity in which many friends enjoy participating.

For many of us, we can’t participate in this activity.  Some of us have never been married.  Other have gotten divorced.  The photos aren’t available from people like me.

So, in order to begin a new tradition, I am starting a “Love Yourself” photo challenge.  This challenge is one that embraces the mandate in the greatest commandment “love your neighbor as yourself.”  It forces each of us to recognize the Divine image within ourselves – no matter who we are related or attached to.

And it is inclusive of all people – no matter their marital statuses.

I bring you my seven “love myself” photos below.

Many of my interesting stories begin with “when I was 19.”  In the fall of 1992, I was 19 years old, very single and very much enjoying life.  I believe this was the only time in high school or college in which I attended a formal dance on my own.  And I still had a blast.

In this twentieth century selfie, I joyfully mark a trip in which I navigated around a city on my own.  Before GPS on cell phones were a thing, I utilized a paper map to find various landmarks around Philadelphia.  Through this experience, I gained a sense of freedom and confidence and have continued to traipse around big cities on my own.

There is nothing easy about going to your little sister’s wedding when (1) you are not married and (2) don’t have a date to the wedding.  But I went.  I stood next to her as maid of honor, gave a toast and still walked away with my dignity.

Here I am at Ecumenical Advocacy Days, a progressive-Christian annual event to discuss justice issues.  On the last day of the event, I met with representatives of my congressional leader and senator.  In those moments, I advocated for various justice issues – specifically women and intimate partner violence.  Advocacy work energizes me as I believe it can make a difference.

After years of hoping and dreaming of completing my Master of Divinity degree, I reach my successful end point on May 14, 2010. 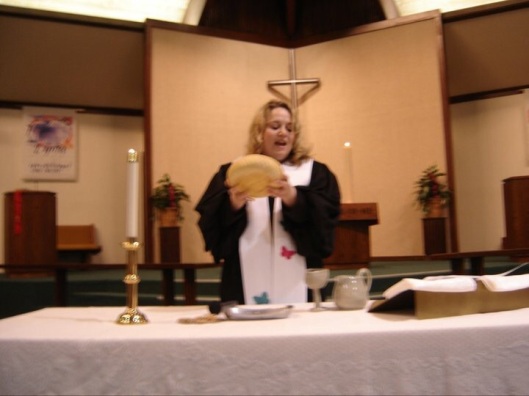 One of the biggest days of my life is represented in this photo.  Not only am I being ordained, I am celebrating the sacrament of communion at the table for the first time.

After writing a chapter in the book There’s a Woman in the Pulpit, I was a part of my first group book signing at the UCC General Synod in Cleveland.  Being a writer and becoming published is another lifelong dream and call which is represented here.  Thank you to Eden Theological Seminary for this photograph.

So single, married, divorced, widowed, separated and cohabitating friends – I challenge you to post your seven photos that represent your greatest self.  In doing so, remember that you are made in the image of God no matter who you are related to or what you still dream of achieving in your life.