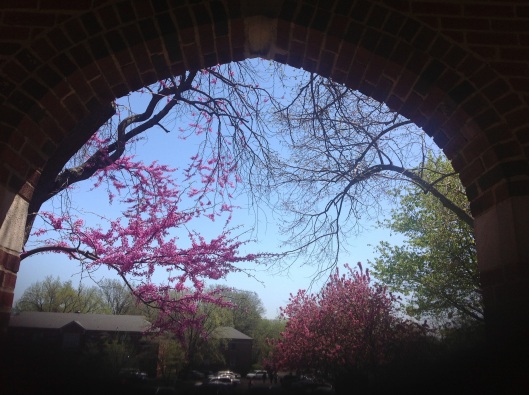 February 1992. I was eighteen years old in my freshman year of college. My friends introduced me to a really cute guy who was about a year or two older. We all hung out talking until around midnight. He then walked me back to my dorm room and gave me a kiss.

Alright. He’s cute. He’s sweet. I hope i hear from him…

The next evening, he calls. He asks me to go out. I didn’t feel like spending time with him that evening, so I politely declined. “You will go out with me,” he demands.

He just couldn’t take no for an answer.

Eventually, we ended the phone conversation. I felt extremely vulnerable at that moment. Thoughts continued to cycle throughout my mind. What if he comes after me? What would this confrontation look like, and would I be safe? Fortunately, I found way to hang out with other friends that evening, away from campus – what I perceived to be a safer space.

Frankly, on that very evening, anywhere where he could not find me was safe.

May 1992. I was nineteen years old finishing my freshman year of college. I was sitting in the library at my college trying to study when a man around my age came up to talk with me.

I was trying to brush him off – at this point I had another boyfriend. But he continuously asked for my number – over and over and over again. To him, it didn’t matter that I was in a relationship with another person.

Finally, I relented. I gave him my dorm room phone number and left the conversation.

A while later, he called me. I pretended that I was my roommate and told Whatshisname that I wasn’t home. He never called back.

But could he ever find me?

Summer 1992. I was still nineteen years old between my freshman and sophomore years of college. I was driving on Route 159 in Swansea, Illinois when a guy in the next car at the stoplight locked eyes with me.

It’s always awkward to lock eyes with anyone in nearby cars. But this one had another agenda.

I started driving once the stoplight turned green. He then followed me.

No matter how fast I drove, he drove. He continuously tried to get my attention. But my attention was focused on working to lose him.

Block after block, he kept up. Then, I saw an upcoming street. At this point he was in the next lane and keeping up with my driving. I quickly turned down the road without giving any indication that I was making that move. He continued to drive on Route 159.

But what if I couldn’t figure out a way to lose him?

These three stories happened to me over the course of six months. Understand that I could continue to write story after story about the varying types of harassments I’ve experienced in 23 years – from catcalls to mindgames to unwanted touching.

Now, I’m not talking about the guy who kindly asks me out even though I’m not interested. I’m talking the kind of behavior when I feel every type of red alarm has gone off and my gut is giving me a bad vibe – the guy who keeps pressuring me even though I continuously say “no.” There are many authentically nice guys out there. (I know since I’m dating one of the nice guys.) However, from personal experience, I can tell that 100% of the men in our society do not treat women as equals, and this type of controlling attitude and entitlement needs to stop. They think they can follow us, pressure us and guilt us into falling for them.

Our society encourages us to be “good girls.” Never say no. Be accommodating. The problem with being the good girl is that the controlling boys like to find us. They like to drain us of any self-esteem we may still have in our souls.

The story of Vashti always resonates with me when it comes to a woman who stood up for her body, mind and soul. She refused to be paraded around like an object by her husband King Xerxes (Ahasuerus) who then, probably, banished her from his life. It was a risked she was willing to take as she didn’t want to be objectified and controlled by men.

It takes years for us to find that confidence to realize we deserve better than all of this. We do not deserve to be paraded around or required to give in to a man’s desires each time he asks.

So when I think of this mass killing spree in Santa Barabara, I think of the way that men have felt entitled to the bodies, minds and souls of women since the Hebrew Bible – from Vashti to Tamar, the daughter of David who was raped by her brother.

When I see the spirit of women on social media this week and the many men who support us, I realize that maybe there’s hope in this conversation. Maybe there will be one less man who demands a date or sex, one less man who chases a woman or one less woman who feels pressured to give out her personal information.

Let’s find ways to stand together, girls and women of all ages. Let’s find a way to help each other feel safe even when we’ve felt violated. We deserve to be given the dignity that God has given each of us – as we are made in the image of our Creator, too.