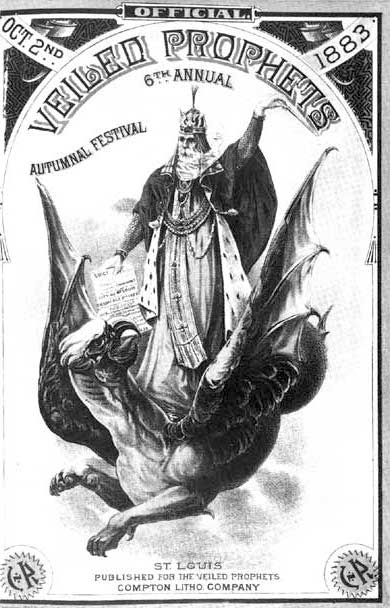 Confession: As a young adult living in the St. Louis area around 1992, I nixed the idea of changing the name of the fair held during the fourth of July weekend.  Growing up, the festival now called Fair St. Louis was always known as the VP Fair.  Why change the name, I wondered.  IT’S TRADITION!  I cared more about what we’ve always done and less about any symbolism and meaning behind the name VP Fair.

As time passed, I learned more about the Veiled Prophet Fair and all festivities connected to the twisted tradition.  During their yearly Veiled Prophet Ball, young adult women from prominent families “come out” to society, with the queen nestled next to a veiled prominent older (almost exclusively white) man from the St. Louis area.  When reading about the history of the Ball, one can see the Confederate roots associated with the pomp and pageantry.

Whether it was our yearly online reminder of these annual St. Louis festivities, stories of removal of the Confederate flag, or dialogues, marches, and votes on the names of the Cleveland baseball team and District of Columbia football team that we had at UCC General Synod this week, we are examining the potential sins of symbols.  Each of these traditional icons have a history in oppression.  While those who honor the symbols today do not necessarily support or promote a culture of bigotry, implicitly, we are all responsible for the pain they are causing minority groups.

Each of the symbols I’ve mentioned continue to hold up an empire where some people are valued over others.  The icons say that our history was fine just as it was, never mind that some people were considered less than made in God’s image.

This is more than just being “politically correct.”  (I find it interesting how people of privilege always fall back on the hardship of political correctness – as if taking away a beloved symbol is worse than taking away one’s life, physical and economic freedoms, and dignity.)  With black churches burning, black Christians being shot in their sanctuaries, and black women preachers physically being threatened, it’s time for us to all gather together to make sure all people have their dignity intact – whether they are a racial minority, ethnic minority – including our Native Americans, woman or other gender minority, LGBT person, religious minority, or person with a disability.  It’s time for all of us to examine each symbol to make sure that the icon isn’t robbing someone of their worth.  It’s time for us to prioritize people over shallow and destructive emblems, and it’s time for us to seek reconciliation for our narrow-mindedness rooted in tradition.